Texas High Plains Writers began on April 20, 1920 as Panhandle Pen Women. Founded by Laura V. Hamner and Phebe K. Warner, Hamner is hailed as the group’s first historian. As a nineteen-year-old, fresh out of Peabody College in Nashville, she stepped down from the train in Washburn, Texas, on March 15, 1891. Simply eager to see her sister and brother-in-law, she had no notion that before she died she would exert her influence on the cultural awareness of Panhandle people as few others have done. 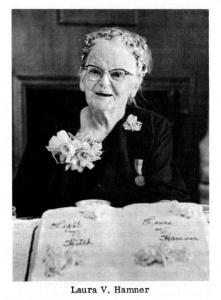 She was a spinster, cared for her parents (and a nephew who died a month before his fourth birthday), taught school, served as postmistress of the Claude post office and Potter County school superintendent.  On losing the election for superintendent in 1934, she embarked on a full-fledged writing career at the age of sixty-three.

In 1935, she published The No Gun Man of Texas about pioneer rancher, Charles Goodnight. It was the first self-published book to be adopted by the State Board of Education. She also published four other books .

Over a span of 21 years, Miss Hamner wrote and recorded 1001 “Light N Hitch” radio programs on KGNC, in Amarillo, Texas, telling the stories of the Panhandle pioneers. And she wrote numerous columns for the Amarillo News-Globe—among them Talk to Teens and Spinster on the Prowl—for about thirty years.

She served as Panhandle Pen Women’s president four times, 1921-1922, 1931, 1941, and finally in 1950. She received many honors — culminating with the Texas Heritage Foundation National Medal presented at a Panhandle Pen Women meeting on her 92nd birthday.  She died in 1968 at age ninety-seven.

Miss Hamner has been memorialized in a mini-opera, Laura V, written by Gene Murray, under the auspices of the Amarillo Opera. A number of grateful modern-day PPW members were in the audience for the premiere production at the Gem Theater in Claude, TX, in June 1998.

Amarillo, incorporated in 1899, is younger than any of the fifty largest cities in the continental United States. Yet Panhandle Professional Writers, a still-growing organization based here, is one of the oldest continuously run groups of its kind in the country.

In the early years, Panhandle Pen Women meetings, in members’ homes, were quite the hoity-toity social occasions. Many members came by train and stayed in hotels.  Sixty years later, times had changed. Most women writers now also held down other jobs.

In January 1983, the Panhandle Professional Writers membership approved a change in meeting dates from Tuesdays to Saturdays — and right away our attendance increased.

Men have always been welcome in Panhandle Pen Women, but, understandably, very few ever joined. Realizing the organization would be much stronger if it included everyone, a name change was proposed in 1987. Since everyone usually referred to the club by its initials, the board wanted to keep the same acronym. W was changed to Writers, but no one could come up with better change for the second P than Professional, and that was proposed to the membership. As President Doris Meredith editorialized in the PPW Window, “What was once appropriate and proper becomes limiting. . . . I suspect Laura Hamner was farsighted enough to recognize that times would change.” She noted that PPW’s constitution had never restricted membership on the basis of gender, or anything else. But “its name, Panhandle Pen Women; did, and does.”

At the regular meeting in September 1987, members approved the bylaws change to “Panhandle Professional Writers, originally Panhandle Pen Women.” Our male membership has steadily increased, much to our benefit. We pride ourselves on our diversity.

In 2015, in an effort to position the group as an aid to both professional and beginning writers, another name change was proposed. The board decided to drop Professional from the name and settled on the new name of Texas High Plains Writers. In the spirit of our new name, we seek to promote writing and support writers all across the Texas Panhandle and surrounding areas.